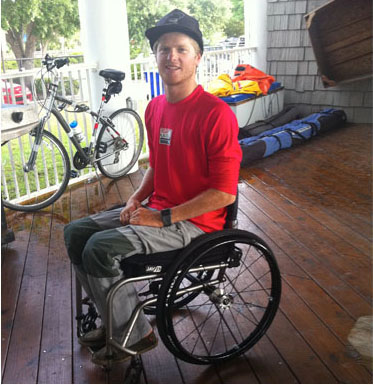 In 2011, when Ryan was 18 years old he broke his neck in a freak accident in which he slipped on a boat dock and clipped his head on the end of the dock. He suffered a spinal cord injury at C6 & became partially paralyzed from the neck down.

After graduating from High School in 2011, second in his class and Male Athlete of the Year, he went to UC Santa Barbara to pursue a degree in physics. He planned to compete on the surf team, which is one of the top ranked teams nationally, and also was considering trying out for the triathlon team.

Wheels With Wings awarded Ryan a grant to receive a new wheelchair he desperately needed to live a more active lifestyle that he once did.

“Thank you Wheels with Wings Foundation for helping me get a new wheelchair that is allowing me to be more independent and live a healthy and active lifestyle.”

Back to Grant Recipients